Words and photos by Stacy-Ann Ellis.

Memories, whether bitter or sweet, are expected to be hoarded. They’re meant to be tucked in the back corners of our minds for nostalgic reflections. The physical trinkets that represent them? Not so much.

The things we’ve acquired from past couplings, whether gifted, given, built, borrowed or just plain stolen, find homes in our homes long after the emotions that validate them have waned. We don’t know why we keep them, but we do. We don’t know why or how these badges of former love or lust survived the purge, but they did.

Some of them still carry the weight of the world, and some of them mean nothing at all beyond a good laugh. But they’re there, bound to us by a memory, and so are the stories behind them.

“It is better to love wisely, no doubt: but to love foolishly is better than not to be able to love at all.” — William Makepeace Thackeray 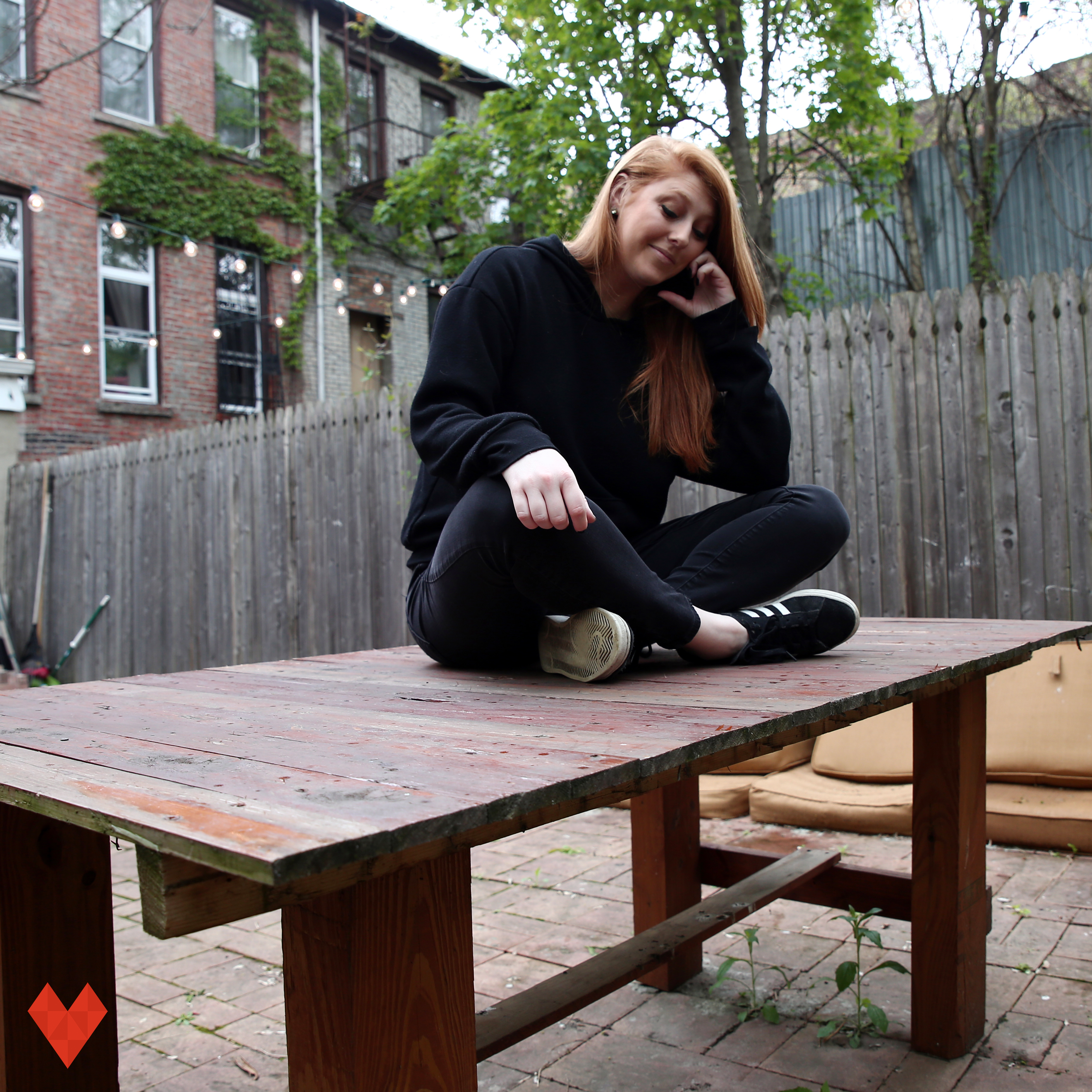 “There was an extra piece of fence in the backyard and we were gonna throw it away. He was like, ‘No, we can make a table.’ We spent probably a month or so, every night sanding the wood and staining it and putting together this table. As soon as we finished it, he took all his tools home. Then all of a sudden, I was like, ‘Hey, wanna come over?’ It was my birthday weekend. He just ghosted. Never heard from him again to this day. It wasn’t even a breakup. We had just been seeing each other for about four or five months. It’s a really solid table. We didn’t, at the time, have any other backyard furniture, so I was like, might as well keep it. He also put some pipe in my room. I didn’t have a closet, so all my clothes hang on the pipe. I think I won in the end with the table and the closet.” 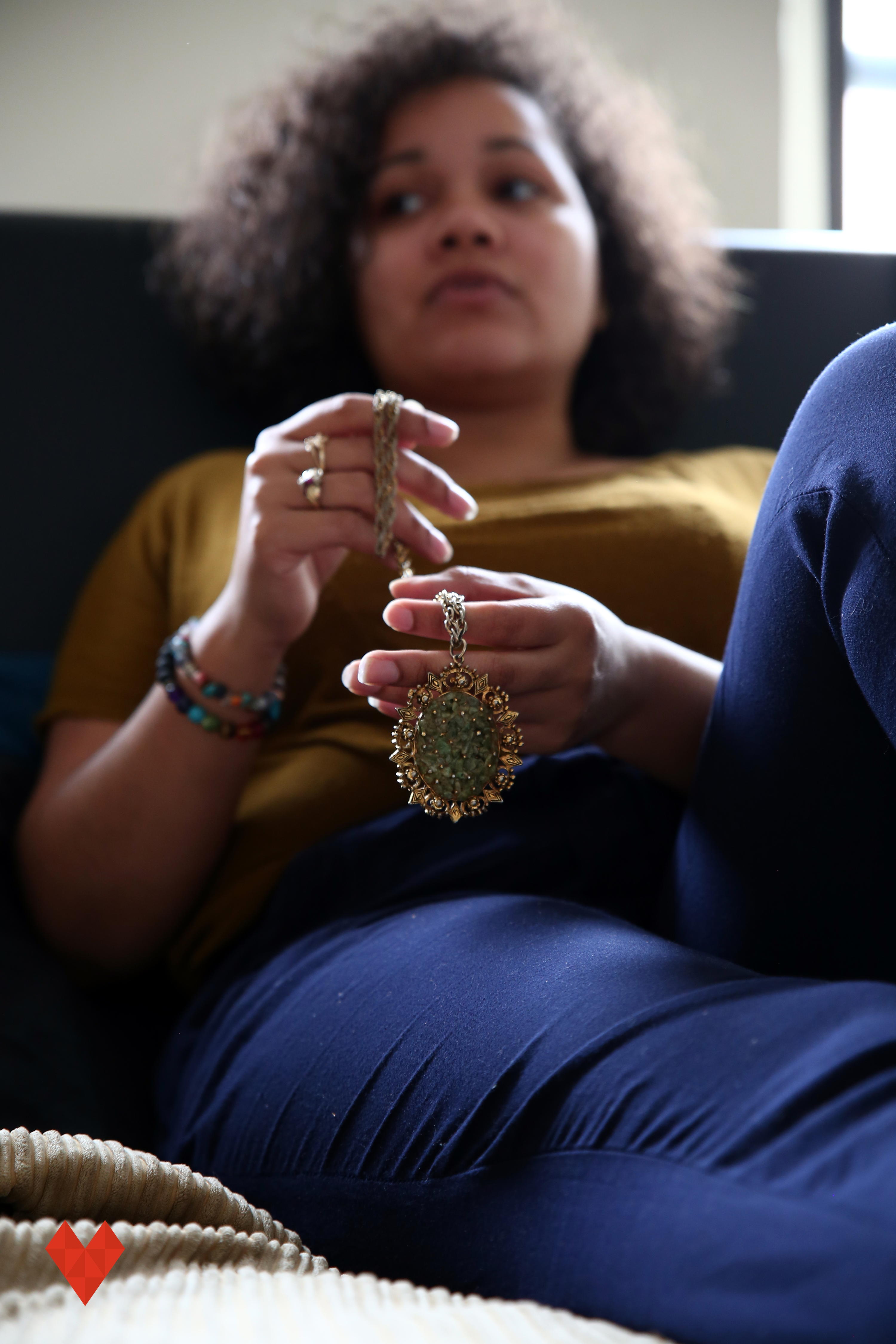 “We were together for about four or five years and this was our first year really spending more time together after I graduated. We went to this thrift store looking for stuff for his house. We were about to leave and saw this behind the counter. He bought it for me; it was probably a dollar or so. It just looked like it belonged to somebody who really enjoyed jewelry, enjoyed shit the way I do. When we broke up, I packed a box and put the paintings he drew me, the pictures that we took, and the gifts he recently bought me for my birthday. I have a special connection to this [necklace] outside of him. I can’t give this back because this is mine now and I’m gonna build my own little memory with it. I have. It didn’t go in the box.” 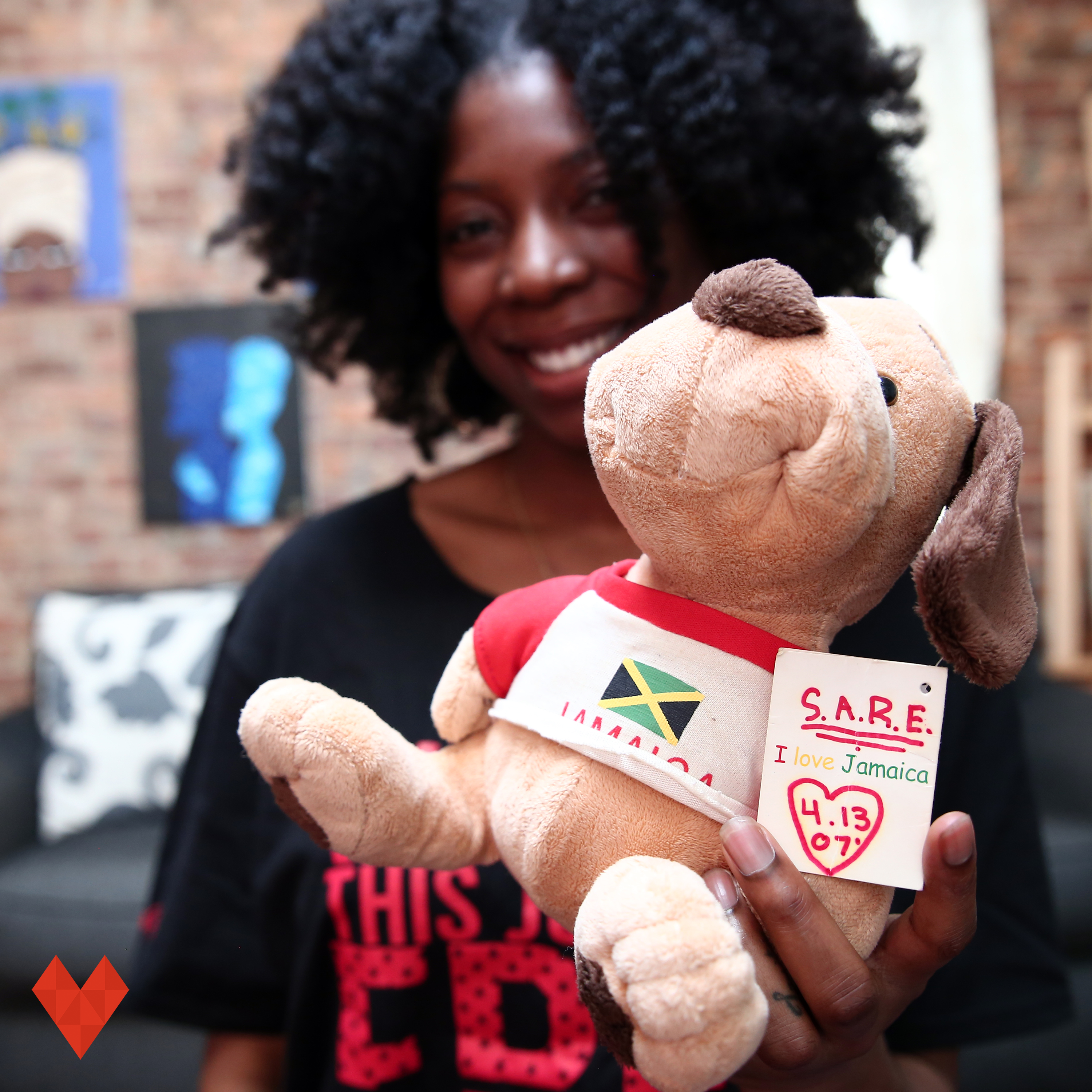 “I was 17 years old and my boyfriend at the time had gone on a family vacation and he brought me back this stuffed dog. It doesn’t have any particularly trademark things on it, but he did write a little message to me on the tag. I thought it was a nice gesture. It was from Jamaica and I’m Jamaican, so I thought it was cute. I kept it. Why not? I don’t think that deeply on it when I look at it, but it was my first and last real relationship and we didn’t end on the worst of terms, I don’t think, so it’s nice to have that little token of, “this happened.” I’m also a hoarder like my father, so I keep memories good or bad. The relationship didn’t work because he was an arguer and I wasn’t into that, so I ended it. I immediately regretted it, but by the next day he’d moved on, so that was that.” 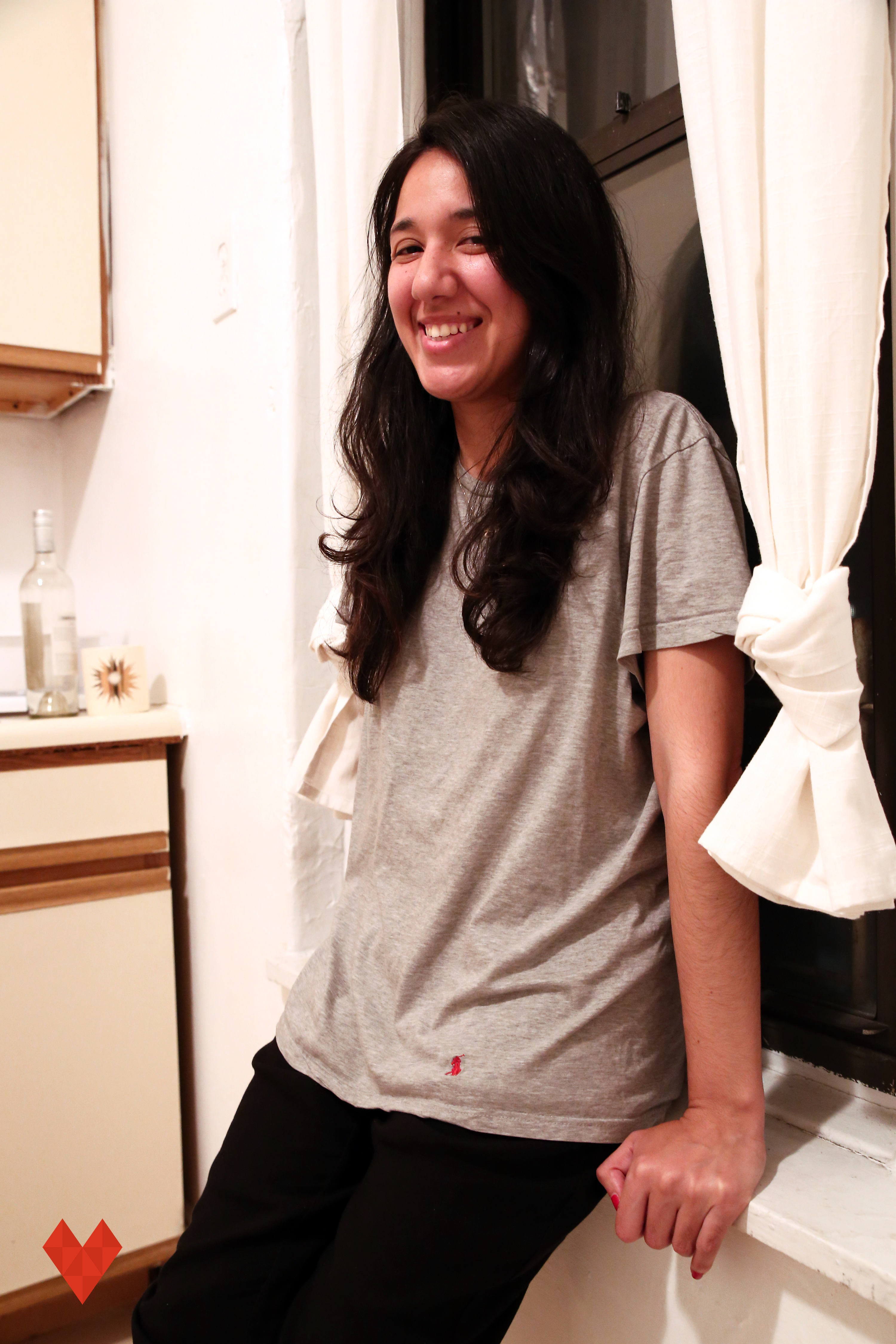 “I remember I would go to work on Monday from his place, after I’d be at his apartment all weekend. I’d always looked for a t-shirt to wear. I grabbed this one time to wear around his apartment and never gave it back to him. I don’t think he knows I still have it until now. I do think about our relationship sometimes when I wear the t-shirt but I mostly think about good memories. I think feelings changed, but we still talk. We’re still good friends. That’s why he’s not getting it back. I hope he doesn’t ask for it back.” 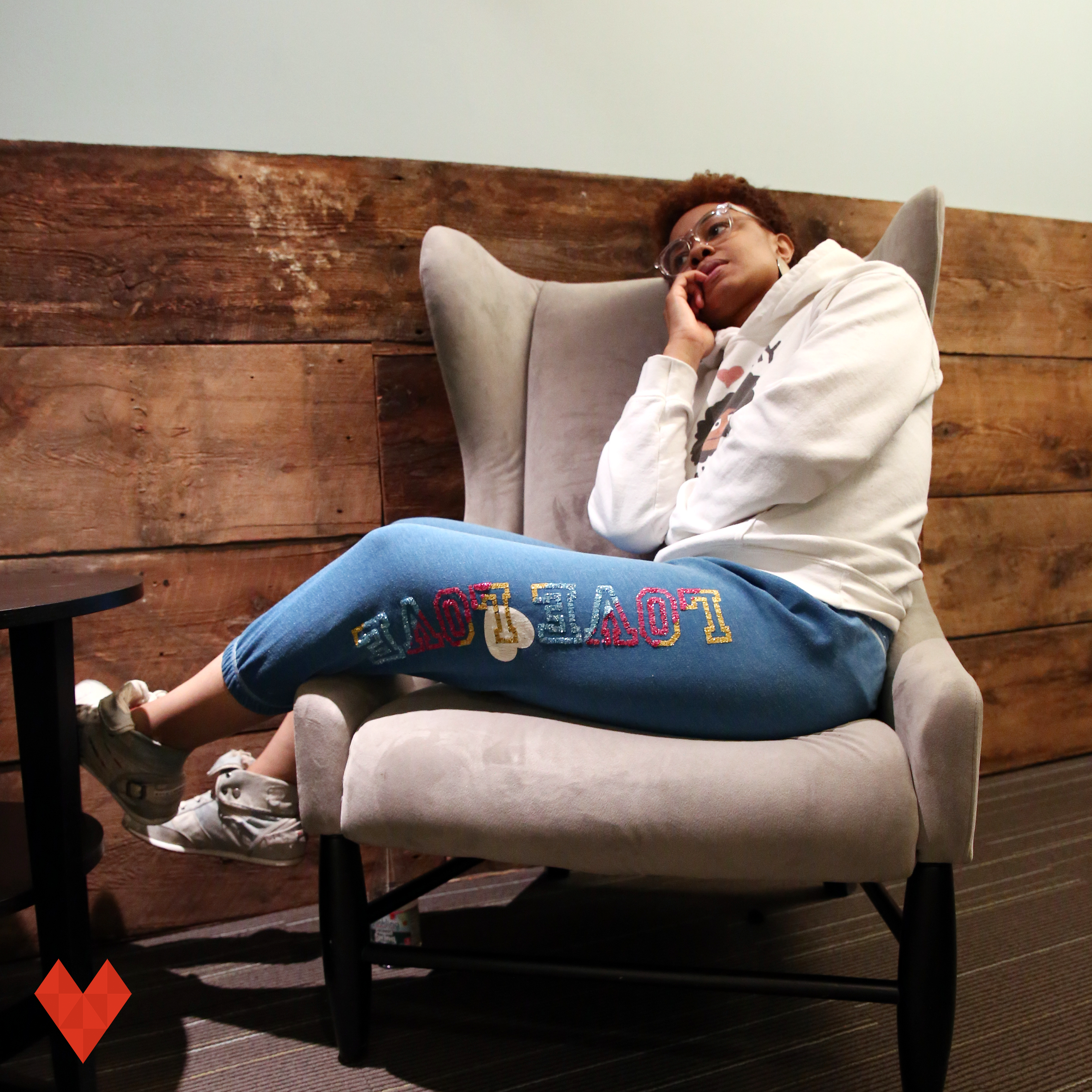 “My ex-boyfriend Anthony got them for me for one Christmas, maybe eight or nine years ago. This was when I was obsessed with PINK from Victoria’s Secret, and he said he stood in the line—the line was forever—and he bought me these sweatpants as well as a yellow LOVE PINK hoodie. I don’t know why I didn’t throw them away. I’ve thrown out other things that he’s given me but not these. I guess because they’re so worn in and they’re so comfortable, but these sweatpants don’t mean anything. Anthony and I didn’t work out for several reasons. I think Anthony loved me dearly; I just don’t think he respected me. Anthony wants a certain type of woman. He absolutely wants a pretty woman, but I don’t think he wants an opinionated woman. And I am not that.” 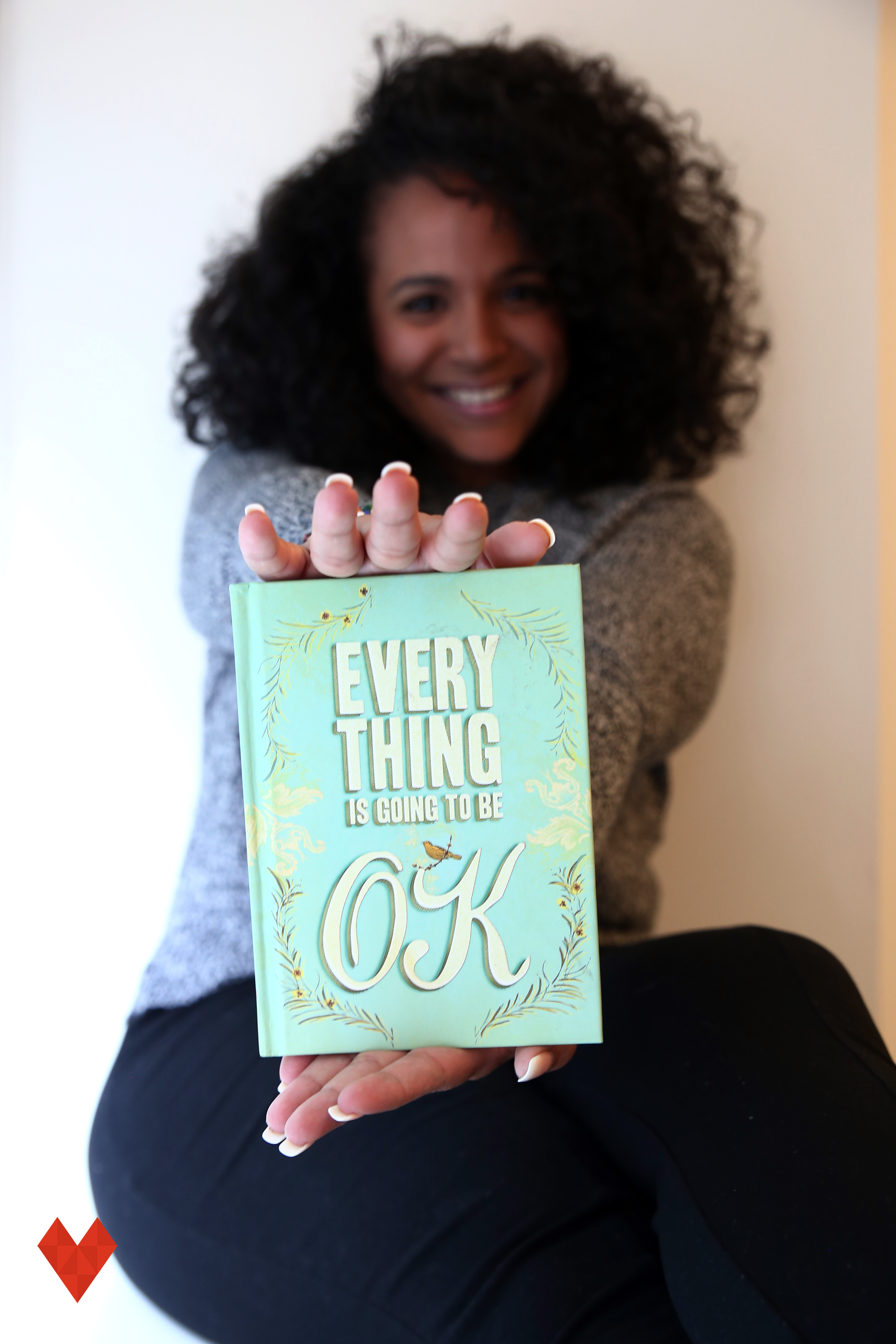 “This is a graphic book of uplifting quotes that I gifted my ex-fiance during Valentine’s Day. We were on a date and I gave this to him because he was going through some things with family. It was just a token of my gratitude and just a token of inspiration. It doesn’t mean anything except that I gave something to someone that didn’t wanna keep it, but it’s a nifty book. I kept it because I’m making the most of my transition and these could come in handy.”

“We did a hat exchange. I had a black Obey hat my ex really liked, so I offered to exchange my hat for his. Eventually he would give it back, but that did not wind up occurring. We tried to meet up after the fact, trying to be friends, and we were supposed to exchange hats back, but he wounded up leaving my hat inside of his car. All he had to say was, ‘I wanna keep your hat.’ I probably would’ve let him keep it [anyways]. It’s useful; it’s a good hat. I see no point in throwing it away. I guess maybe in the crevice of my mind it may have some sort of deeper meaning, but I haven’t come to that realization yet.”

This site uses Akismet to reduce spam. Learn how your comment data is processed.